Law enforcement agencies are vital to certify security for every nation. The current age is highly dependent on technological advancement and the law enforcers are not different from that. The agencies are now relying upon digitally recorded data. The exclusive attributes help them to identify criminals. The police departments are the prime users of various devices like digital interview recorders, body-worn cameras, and surveillance cameras.

Such devices store a number of crucial and sensitive information and security assurance is paramount. Every day, terabytes of data are generated by police interviews and recorded scenes that proceed as evidence later in court. To make sure the entire process goes right, data integrity shouldn’t be in question. In this certain case, WORM can be a great solution in providing the highest level of data security.

WORM stands for Write-Once-Read-Many formula. It is a tamper-proof flash storage device that fortifies data security ensuring all the files remain intact. This makes all the information intact, which means; none can modify or delete anything once saved. Being a manufacturer of flash storage devices, Flexxon has introduced a WORM SD and microSD card solution which is absolutely easy to use in police audio recording devices, body-worn cameras, and surveillance cameras ensuring proper data security.

The Devices Used by the Police Force

The law enforcement community needs to maintain safety and security for the storage and maintenance of digital data. Security cameras come to great help to identify criminals and criminal offenses. The footage of the interview recorders, surveillance cameras, and body cameras are used as the source of proof that helps in true reasoning for criminal investigations.

The use of surveillance cameras helps in gathering video footage to recognize criminals and to understand criminal activities. It can also be used as protection against crimes. On the other hand, body-worn cameras are used by police officers. This device can record audio and video at the same time to monitor their behavior and enhance accountability. The interview recorder is another solution used during live audio and video interview sessions. It saves the record of testimonies so that it can be used for further reasoning.

All these devices are essential to record events and it is also important to make sure the footage is not morphed because these data participate in solving critical cases and make it easier for the authority to announce a fair judgment. It is hard to anticipate the number of data generation through security cameras and top-notch protection should be assured. WORM enhances security as a safeguard to the video and audio recordings towards these applications so that the files can remain intact inside the devices.

To store a 36mm film of influential images and videos, the system needs to have a secured storage device, or else the data can be stolen by someone involved in criminal activities. All thanks to the new WORM technology that keeps the data saved permanently in an unalterable format for the rest of its life. The extended memory capacity prioritizes the device storage for the police records. It can be seen several times once a file is saved. So, whoever wants to check on something specific about the case, can see it right away.

Flexxon is the leading manufacturer of NAND flash storage devices. With a wide range of customers worldwide, Flexxon has formed a community ensuring the highest level of reliability, integrity, and compatibility. Currently, they are developing a WORM SD and microSD card solution with enhanced data security features. This specific memory solution emphasizes the need for forensic pictures, video footage, and recorded police interviews. The cards come in 4GB to a maximum of 32GB of memory capacities and plans are underway to have higher capacities for keeping up with the increased number of digital stimulation.

Flexxon WORM Memory Card is a reliable solution establishing data integrity with a secured file storage solution for data storage applications. The following features are enough to understand why it is perfect for law enforcement agencies: 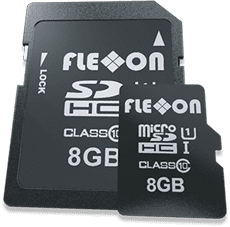 The durable structure of WORM takes care of critical issues in one solution where most of the law enforcement agencies spend a lot of money every year only to retrieve lost or damaged files. Flexxon’s WORM SD and microSD is effective and efficient in terms of maintaining data security:

How WORM is Changing the Game of Law Enforcement

At the war of keeping data safe and secured, digital storage devices are coming up with new ideas. Among those WORM is winning because of its remarkable features. Nowadays, many law enforcement agencies and government entities are using WORM storage solutions for its obvious advantages. The video recording devices including surveillance cameras, body-worn cameras, and interview recorders hold the SD or microSD card slot. The tiny slots on these devices are enough to keep WORM and enhance security functions. Flexxon WORM memory card is also compliant to use in other application devices to achieve the highest peak in serving the best security solution.

Beyond law enforcement applications, Flexxon expects to move ahead with its cutting-edge WORM technology to other applications by establishing data integrity and reliability. Any organization generating sensitive data can use WORM SD and microSD solution by Flexxon and enhance data protection towards the organization. WORM technology in POS and Europe Fiscal Law is also common now.

Benefits of WORM technology in POS and Europe Fiscal Law