The memory device segment, including DRAMs and NAND flash, continues to be a seller’s market. As a result, NAND flash suppliers are forecast to post higher revenues in the third quarter thanks to higher contract prices of mobile devices and SSDs. 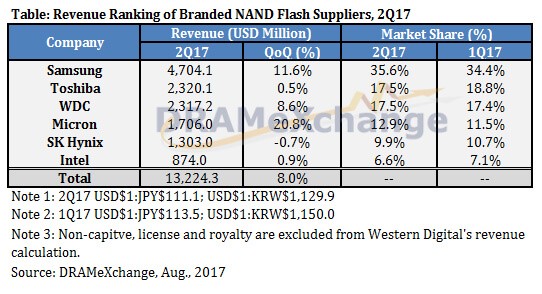 Facing the limitations in the shrinking of the manufacturing node for 2D-NAND flash (or planar NAND flash), suppliers have successively shifted to 3D-NAND flash (or vertical NAND flash) design and manufacturing technology,” said Alan Chen, senior research manager of DRAMeXchange, in a statement. “However, the industry has also experienced a substantial loss in production capacity during this transitional period. This in turn resulted in tight supply and rising contract prices.”

“We expect supply to be under strain for the rest of 2017,” he continued. “Relief will come later in 2018, when the manufacturing of 64- and 72-layer 3D-NAND flash reaches maturity.”

Suppliers agreed that supply and demand will remain tight in 2017 despite production capacity ramp-up of new technology.

“As for supply, in spite of suppliers’ mass production of 64-layer V-NAND, overall supply and demand is expected to remain tight due to limited supply growth compared to demand growth led by the reduction of our industry planar capacity,” said Se Won Chun, senior vice president of Samsung’s Memory Marketing group, during a conference call.

“In the second half, including the third quarter, despite the fact that industry supply of 3D NAND and sub-20-nanometer DRAM production will increase, overall supply and demand is expected to remain tight due to continuous solid demand mainly from mobile and server,” added Chun.

Samsung plans to expand its V-NAND capacity at the Pyeongtaek fab to meet strong demand for high-density and high-value server SSDs. The timing for the expansion will depend on market demand. The company also expects to convert a part of its existing planar capacity to V-NAND.

“For NAND, although demand growth for mobile slowed down due to partial inventory readjustment by some mobile companies, overall NAND demand remained solid thanks to continued strong demand for high-value-added server SSD and PC,” said Chun. “Supply continued to be insufficient due to decreasing panel capacity during the process of 3D-NAND migration, combined with restricted industry 3D-NAND supply.”

A few memory suppliers believe the supply shortage will start to ease in the fourth quarter as they continue to ramp-up 3D-NAND production capacity.

“The supply shortage is expected to ease somewhat from the fourth quarter this year,” according to Seok-Hui Lee, COO, at SK Hynix, in a webcast.  “Suppliers continue to increase their 3D-NAND production capacity and will start shipping 64- or 72-stack products in the fourth quarter.”

Lee said the company plans on low 10 percent bit shipment growth for DRAMs and mid-20 percent growth for NAND in the third quarter, which is “slightly below market growth.”

In addition to the capacity increase, SK Hynix is building two new fabs – one for DRAM in Wuxi, China, and another one for NAND in Cheongju, Korea. Construction is already underway and expected to be completed by the fourth quarter of 2018 at the earliest.

However, smartphone demand at the start of the traditional busy season in the third quarter and strong demand from data centers for enterprise-grade SSDs will continue to put pressure on NAND flash supply, according to industry players.

In the second half, the launch of new smartphones with higher density NAND will drive demand for NAND products, said Lee. “Particularly with the leading players expanding their market share, higher hardware specifications for smartphones will become the new norm.”

Suppliers also expect strong demand for enterprise-grade SSDs. One of the main beneficiaries of rising demand for SSDs is Micron, which increased its NAND flash bit shipments in the second quarter. The company also lowered the average bit cost by expanding its 3D-NAND flash output.

In the past, Micron’s technology position in the industry for 2D NAND (planar NAND) was weaker and lagged in terms of cost capability, said Sanjay Mehrotra, Micron’s CEO during a webcast. “With 3D NAND, Micron has done an excellent job in terms of developing the technology and achieving cost competitiveness.”

“What’s important here is that Micron has financed this unique architecture of putting CMOS, the periphery circuit under the memory array,” continued Mehrotra. “What that does is it gives Micron the smallest die size in the industry. Micron’s 32-layer 3D NAND was extremely cost-effective in the industry and even today is in production as the cost-effective memory. Micron’s 64-layer technology capability is very cost effective as well and enjoys the benefit of a small die array.”

But it’s not just technology capability that matters, it’s also the ability to ramp the technology into volume production “to achieve the overall lower cost of production for our memory and solutions,” Mehrotra added.

Touting the company’s focus on value-added solutions going forward, Mehrotra said “the value-add solutions in NAND are a greater mix of solid state drives, which are replacing hard disk drive fast in client computing applications, in notebook PCs as well as in data center and enterprise applications. This is the major area of growth for the NAND industry and major area of focus for Micron, both on the enterprise and cloud computing side for SSDs as well as on the client side.”

“Demand for high-density server SSD is expected to be strong, driven by increasing adoption of all-flash arrays along with the expansion of new data centers,” agreed Chun.