The modern world is more data-oriented, requiring the most modern technology to ensure enlarged capacity and better performance. Formerly, the traditional HDDs (Hard Disk Drives) were the key but the demand shifted towards the SSDs (Solid-State Drives). The HDDs had some shortcomings but SSDs fulfilled as it has no moving parts, speed and performance are way higher than HDDs, and the rate of failure is comparatively low. Like everything, there is a major weakness in SSD that includes sudden power loss, data loss, or corruption during usage. Power loss protection is the key to prohibit data loss.

70% of small businesses go outdated within a year due to the heavy data loss. In the past 5 years, more than 50% of companies experienced downtime and 35% of it was due to sudden power loss. Data loss in SSDs introduces the bigger risk of valuable data being lost under serious context. This is a serious issue that requires to have a prevention method or tool to help the data organizations from the negative impacts of data loss by incurring Power Loss Protection ( SSD PLP).

Power Loss Protection or PLP is a system to secure data during sudden power shut down while the flash storage is under some actions regarding programming or writing. It is a mechanism that ensures that the data is not lost because of sudden power failure. PLP keeps the system stable by the technical support from the controller firmware and maintains the data in the DRAM will be flushed to NAND. Additional power support is gathered through the capacitors from the PCBA power backup to complete the action.

The SSDs are accumulated with PLP technology that safeguards the applications and techniques during and after a power loss event is occurred. The objectives of PLP are:

During normal system shutdowns, the SSD receives a “Standby Immediate Command” from the host ATA driver. It alerts the SSD that the system is shutting down and the SSD is getting prepared for power removal. So, the SSD gets enough time to flush its cache buffers from volatile storage to non-volatile flash memory and update the mapping table.

On the other hand, during a sudden power failure or voltage drop fails to transmit the “Standby Immediate Command” to the controller. This can irregulate the system and all unwritten information will be lost or become corrupted files.

The modern NAND flash devices comply with hardware-based designs to constrain the power capacitors. The onboard SSDs and the implementation of PLP keep the important metadata information written to the flash memory. The SSD is the initial storage solution to the volatile memory for a temporary buffer for active data writing. The power loss protection SSD contains a DRAM cache before flushing down to the non-volatile flash memory for safekeeping. It helps to assure a successful recovery of the SSD for the next power connection. The process ensures the data is stored safely before power removal and the mapping tables are kept on track of logical block addresses.

A few months back, Taiwan was hit by sudden power blackouts due to human error at the grid which crashed all the systems and affected productivity. The sudden power outage kept them in dark for more than 12 hours that stopped all their works. They were even stuck in dark at night. An old hospital was quite affected due to this incident. The hospital didn’t update their storage system for years which outdated the storage solution without having the power loss protection.

All the patient details and important hospital documents were saved into the system and without prior notice to the power blackout, all the data was crashed. They couldn’t notice the hazard until the power came back. When they tried to on their devices, their system went down permanently that they had to replace the old memory device with a new one. The modern devices have the PLP technology but the old ones didn’t which cost them a severe data loss for the past 10 years or more. Even they had to go through the patient checkups again because their system was crashed and all the records in their database were gone.

The SSDs by Flexxon are upgraded to prevent data loss if there is any encounter of sudden power loss. It is High-performance data storage devices are available at affordable prices in the market, but with a major drawback. The problem is that they are unable to protect data during power failure. That’s where Flexxon SSDs come to the rescue.

During SSD operation, data is temporarily stored in DRAM for improved performance. But DRAM needs an external power supply to function. A sudden power failure may lead to the DRAM cut abruptly and critical data will go. The capacitor provides power to the DRAM during a sudden power failure, making it possible to flush data from DRAM to NAND memory. 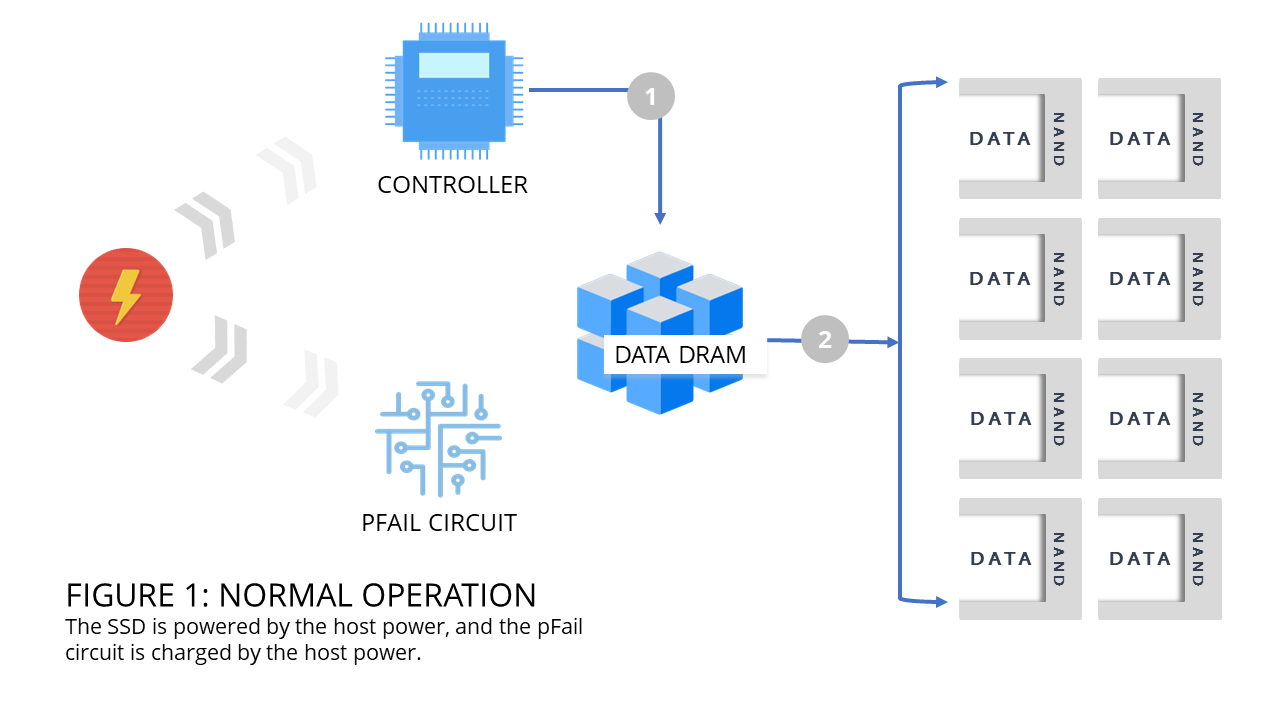 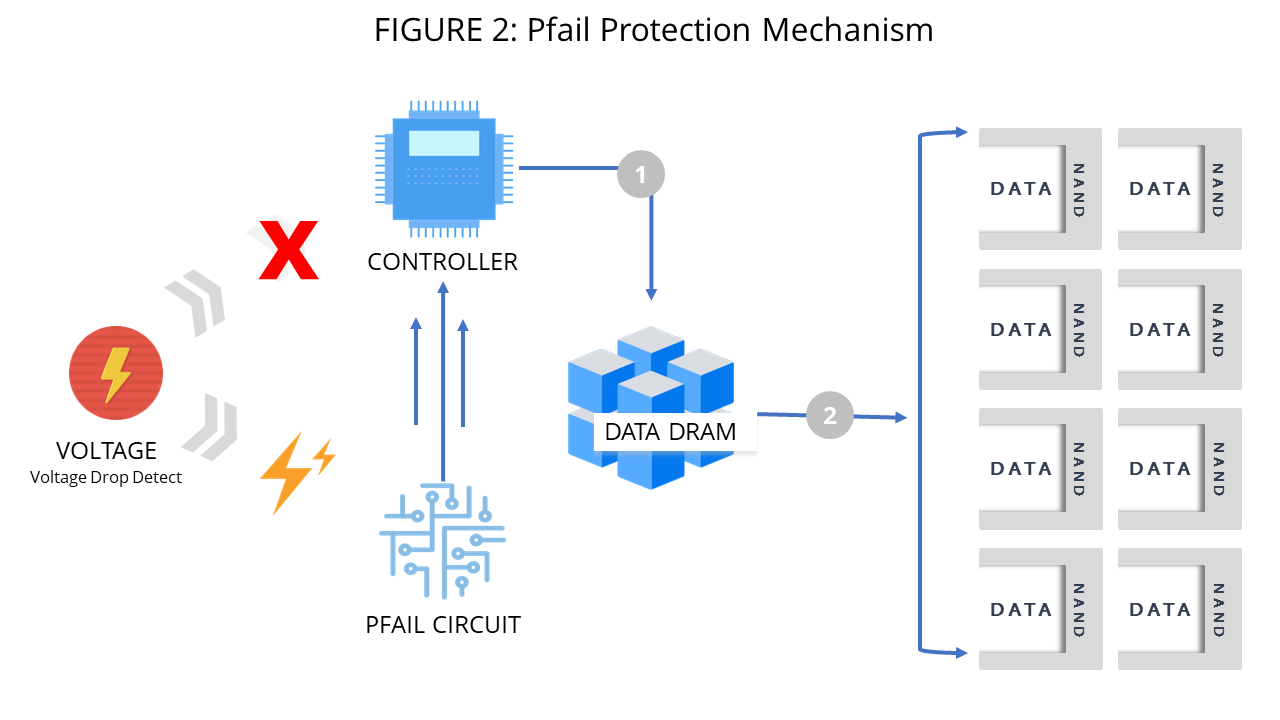 When SSD detects the host power dropping, the pFail protection circuit to the SSD while it flushes cached data from DRAM to NAND. 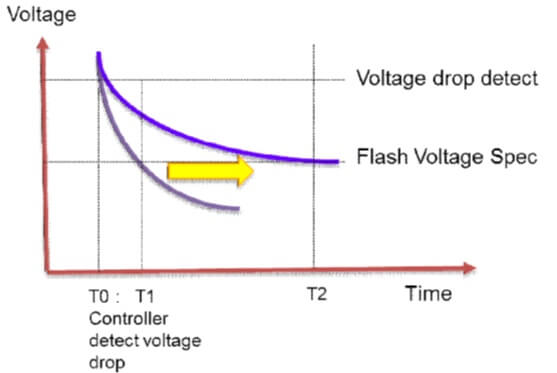 Without PLP, the voltage will drop soon and all data in the buffer will be lost at T1. By PLP function (HW and FW), SSD would be ready for shutdown before T2. The eMMC power loss protection works the same way to maintain data reliability. 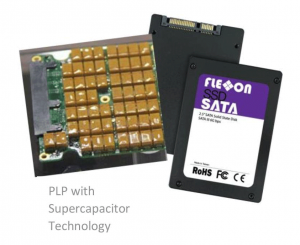 The data can be stored temporarily in DRAM for better performance. DRAM functions on external power can be a reason for data loss during sudden power failure. Flexxon Power Loss Protection provides a time window to quickly secure data by flushing it from DRAM to NAND memory.

It enables power loss solutions that power up the DRAM for data flushing to NAND is complete. As a result, you no longer have to worry about power losses

Almost all the applications of this 21st century require to safeguard with redundant power supplies, battery backup systems as well as power generators. It is important for an uninterrupted power supply in data centers and every organization. The data storage devices with power loss protection in NVMe and eMMC is also important according to the application usage.

Flexxon emphasizes data security and paved the way towards the increased number of data replication architectures. The SSDs provide high stability and enhanced durability determining the Power Loss Protection into the system application. It makes sure all the data remain safe and sound during sudden power failure.