Believe it or not, but in the contemporary era, almost anything that serves a data storage function is most likely going to have a NAND Flash storage.

Be it the smartphone you use, the computer at your workplace, the server in a web hosting, or even the most complex medical and military equipment.

Almost a petabyte (that is a million Gigabyte) worth of NAND storage products have been shipped worldwide in the last decade.

It must also be borne in mind that not all NAND Flash memory products are created equally. There is a difference between NAND flash cells, types, and understanding that difference is vital, which is often overlooked by many consumers.

Different types of NAND Flash serve a different purpose depending upon their characteristics, endurance, performance, cost, and reliability.

Consider a new storage device, for example, a solid-state drive or NAND Flash SSD. Initially, all the storage blocks that it contains are erased and are in a new state. Thus, the incoming data is written directly to the flash media.

However, once all of the blocks on the flash storage media are filled, the SSD must electrically erase previous blocks to make room for new blocks of data. This erasing and writing of data is called as Program/Erase cycle (P/E cycles) and it is of paramount importance in NAND flash storage.

A NAND flash storage is capable of enduring only a limited number of Program/Erase cycles. Moreover, the P/E process makes Flash storage vulnerable due to the deterioration of the oxide layer that is responsible for holding electrons in a NAND flash memory cell. As a result, the flash storage eventually wears out and loses its ability to effectively store data. 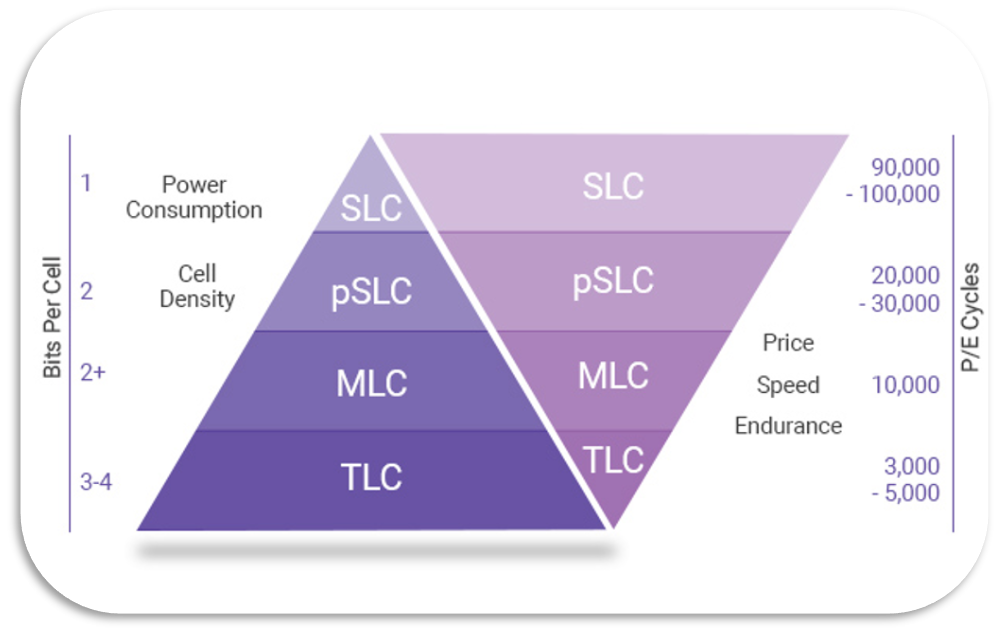 The addition of bits to a single cell increases the number of states a cell can possess; hence, the storage capacity is exponentially increased. However, some other trade-offs will be discussed in the section below.

UNDERSTANDING THE SIGNIFICANCE OF SLC, MLC, AND TLC IN NAND FLASH

Based on the structure of Flash memory cells and how many bits each cell can store, the cells are divided into three categories (tlc vs mlc vs slc) :

The single-level flash cell, as the name suggests, is capable of storing one bit per cell, and two levels of charge. It can be either on or off when charged. SLC NAND has the advantage of being the most accurate when reading or writing data. Add to that, the perk of lasting the longest data read and write cycles. The average program read/write life cycle, also known as the Program/Erase (P/E cycle) of an SLC NAND is between 60,000 and 100,000 cycles.

1. The most expensive type of NAND flash in the market
2. Often limited availability in smaller capacities
3. Only available in 2D formats

A pseudo-SLC is an optimized version of an SLC that ranges between an SLC and an MLC. It is equipped with better performance and lasting ability as compared to standard MLC. The Program/Erase cycle of a pSLC is expected to be about 20,000 cycles. pSLC can be considered as the lower-cost alternative to SLC while maintaining some perks of SLC as well.

1. Economic alternative than SLC for an enterprise SSD
2. Better endurance and performance over standard MLC

1. Does not match the prose of Single-Level Cell NAND flash SSDs in performance

Multiple level cell stores up to 2 bits of data on a single cell and four levels of charge. One of the significant advantages of MLC is the lower manufacturing cost relative to the Single-level cell flash. Multiple-level cell flash is generally preferred for consumer SSDs; however, the data read/write life cycle is around 3000 per cell, which is quite less in comparison with the SLC.

1. Not as durable as SLC or enterprise SSD
2. Lower P/E cycles as compared to SLC

Triple-Level Cell is capable of storing 3-bits of data per cell for up to eight levels of charge. TLC NAND flash is most commonly used for consumer-grade products. In comparison with the precious mentioned NAND flashes (SLC, MLC) this flash offers relatively lower reliability, performance, and endurance. Nevertheless, the higher memory density and economic price are a trade-off for the drop in performance. The 3D NAND variant can reach up to 500 to 1000 program/erase cycles per cell.

1. Most economical manufacturing
2. Available in both 2D and 3D variants
3. Best suited for consumer use 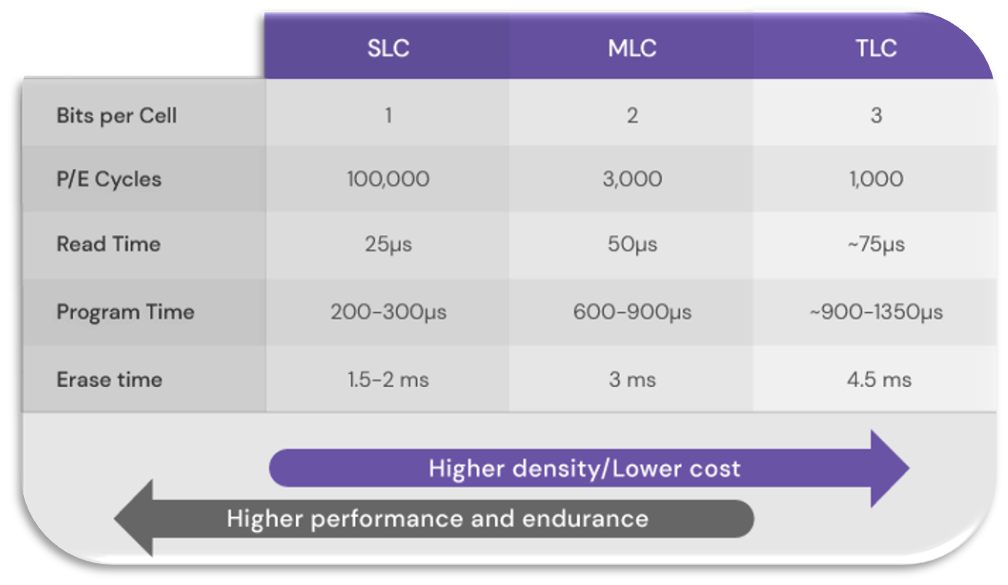 Conclusion: The Paradigm of Cost and Performance

While with the increasing number of bits per cell there is a reduction in manufacturing costs and increment in storage capacity, on the other hand, one cannot ignore the adverse effects this has on the endurance, reliability, and performance of the NAND flash.

This means that each additional bit per cell makes it more complex and time-consuming to read and write from the cell. Consequently, the voltage need also increases and so does the consumption of power. Then again, higher voltage is linked to a higher temperature, which can generate a phenomenon known as electron leakage. This means data becomes more vulnerable to corruption.

Similarly, every additional bit increases the demand for comprehensive error correction technology. These solutions hold the responsibility of maintaining the integrity of data, but they come at a price of higher latency and lower random performance. Notwithstanding the mentioned drawbacks, the marked reduction in costs and increased storage capacity make up for a reasonable trade-off.